Now this is the sort of story you’re all interested in reading about. I can see it now, ‘man forced to eat his own penis after bitcoin bet goes sideways.’

This is the indelible position John ‘Jungle Killer’ McAfee has just placed himself into. Unbelievably, he’s wagered to eat, mind you, his very own dick should the price of bitcoin not rise 22,636% to $500,000 inside of three short years. Here is the Twitter thread where this outlandish bet was forged and made. 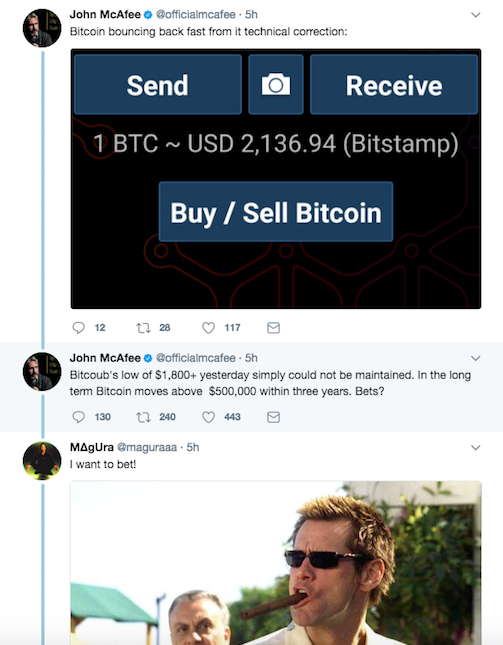 Thus far, it appears McAfee has the upper hand in this death bet, with bitcoin soaring off the weekend’s lows.

Even still, it will take a rally of monumental proportions to save the penis of John McAfee, who, obviously, places little value on his human anatomy. It’s worth noting, McAfee’s new company, MGTI, fashions themselves to be North America’s largest bitcoin miner – leveraging up to purchase high powered machines to mine the valuable cryptocurrency.

You can peruse his cocksure twitter feed, where he’s challenging a sundry of normies to six figure bets based off the eventual price of Bitcoin. He wants money to be held in escrow and will do a minimum of $100k. He quite literally placed his balls where his mouth is. Let’s just hope it all ends up well for Mr. McAfee, as we’d all prefer to see him walking around, virile, with purpose, and placing future bets on his seemingly expendable and valueless penis.

No word on how he intends to ensure the removal of his penis by betting participants, who take him up on this venture.