You are at:Home»U.S.»Police State»#BlackLivesMatter Vs. #AllLivesMatter
By Paul Keller on July 25, 2015 Police State
There is an ongoing dispute between the #blacklivesmatter crowd and the #alllivesmatter crowd. Generally speaking, these people have a lot of common ground. They are not OK with anyone being brutalized or killed, or having their basic human rights trampled on by police, or by anyone. Day after day on social media you can very easily find a multitude of articles and videos where some police officer is brutalizing someone simply because they can, or because the person got an attitude with them, or because the person didn’t prostrate themselves quickly enough and blindly obey the blue suited thug who thinks his badge and gun make him The God of All the Law. In my opinion, a man of courage doesn’t kill people “because I feared for my life” just because someone is running away or has an attitude. Brave men don’t go around shooting people’s dogs for barking, beating people while they are in handcuffs, pepper spraying and tasing people for next to nothing, and choking people to death for minor, bullshit offenses. I could provide you examples of exactly those things happening all day, every day if you wanted me to, but if you are even half-ass paying attention to the news and social media, you are already well aware. Postal workers don’t kill dogs all day long, and bouncers deal with bad attitudes all the time without escalating the conflict to fatality. The issue of police brutality should be something that everyone can agree on, except for perhaps the copologists whose natural instinct is to defend police no matter what, under any and all circumstances. They believe we should all act as if police are our owners and blindly obey any and all commands, rights be damned, and if we don’t, we deserve what ever happens to us. Fuck that, and fuck them, but what is the problem with people who should be on the same side here? Mostly, I think it is a problem of perception.
First, let’s look at why the #blacklivesmatter crowd takes issue with #alllivesmatter. Consider the following: You are at a benefit to raise money and awareness for breast cancer, and everyone has their little pink ribbon on, runners are going to have a marathon, sponsors are going to sponsor them, and everyone agrees it’s a good cause and we all want to help. Then some guy shows up and starts in with the “You know, prostate cancer is a problem too!”, and it’s rude and awkward and people get uncomfortable. That’s sort of how the #blacklivesmatter crowd feels when they see #alllivesmatter. They feel as though it’s their cause, and since blacks are disproportionately targeted and imprisoned, this is their movement, in pursuit of their justice. They aren’t saying that black lives matter more, but that black lives matter too. Is that a fair point? Look at the photo below. 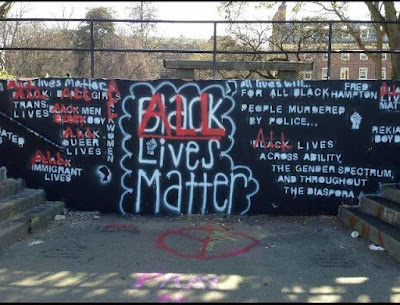 (Source: Josh Odam, Facebook)
During this whole thing (the cop stuff, in the context of recent and even not so recent history) I have been doing my very best to imagine how I would feel if I were a black man. I can’t ever really know what that’s like, but I have listened to my friends, and read the online comments of blacks, and I’ve read some black authors, and I have made what I think is a good attempt. I’d look at that photo above and say “Oh come the fuck on! We can’t even have a single goddamn piece of concrete without these fake ass, self-described ‘colorblind’ poseurs desecrating it?”.
I’m not saying that’s the right attitude to have, or that I would feel that black lives matter more than other people’s lives, but I’d want some space to call “ours”. I understand that it would likely be pure emotion driving my attitude about it. There are lots of things I see that I don’t believe are perfectly right, or perfectly rational, but I understand.
We know that race is more of a social construct than an actual thing, but if people believe in it, it is real for all intents and purposes. I think it would be awesome if we all suddenly just stopped giving a single fuck about race and just judged people as people, but we aren’t there yet.
You have to wonder, why did the people who spray painted “ALL” over “BLACK” feel like they needed to do that? Did they honestly believe that it would inspire unity, and that when black people saw it, specifically the people who painted the original, they were going to say to themselves “Oh, you know, they’re right. I’m glad they corrected us. We should have said ‘all’. Next time we’ll get it right.”?
Does anyone believe that anyone believed that was going to happen, or does it seem more likely that this was akin to giving these folks the finger?
As part of the racial majority (I’m a German, Scottish, Native American Jew), there is always private space for me. I own property. If I want to isolate myself from all other races, I can, and I could paint whatever I want on some concrete and not have to worry about anyone “correcting it”. Blacks in poor neighborhoods don’t own anything. They are all renting, probably from a white guy or the state if it’s public housing, subject to inspections, usage limitations, and I imagine it probably feels like they don’t have a single space to call their own and let loose completely. I’m not saying I agree with how poor black communities respond to certain situations, but I think I understand, a little bit.
OK, so why does the #alllivesmatter crowd have a problem with #blacklivesmatter? They feel it excludes people. They don’t want to only oppose police brutality against black people. They oppose it for all people. They don’t think that anyone of any race should be murdered or violated. They feel that singling out one particular race is divisive, and that the cause as a whole would be better served if everyone, of every race, were unified under a single banner.
Both sides make valid points, but it seems to me it is the way each side perceives the other hashtag that is causing the division. You might say “Well fuck ’em. I know my own intent better than they do. I’m trying to fight the good fight and I don’t give a shit how my hashtag is perceived.”. Yes you do give a shit. Of course you do, and what’s more important: Intentions or Results? When you use a hashtag, you aren’t just putting it up for you to look at. You are putting it into social media, to rally people to your cause. You most certainly have considered the perceptions of others. At this point, it is simply a question of to what degree you have considered it, and whose perceptions you care about most.
Meanwhile, bad cops are out there fucking people over, and they don’t give a rat’s ass about your hashtag disputes. They only care about whether or not they can continue to get away with it. In my opinion, those of us on the protest side would do better not trying to fight each other and “the good fight” at the same time. I think, as a courtesy, accept that you may never agree on the hashtags. If you are in the #blacklivesmatter camp and you see #alllivesmatter on social media, focus on the common ground you have with that person rather than getting all up in their shit because you think they should have used #blacklivesmatter instead. If you are in the #alllivesmatter camp, extend the same courtesy when you see someone use #blacklivesmatter, and for fucks sake don’t self-righteously “correct them” or desecrate a make-shift monument. If someone is on your side, except for the hashtag they are using, why not, simply as a courtesy, accept whatever olive branch or token of unity they are willing to offer? If you are more upset about hashtags than death and brutality, you need to get over yourself. If someone else’s pride bothers you, you have too much pride of your own. Put aside those disputes that are less important than the lives and rights of the victims you claim to be an advocate for.
This article first appeared at Paul Keller’s blog.