When Chicago implemented a new tax on soft drinks, the Illinois Retail Merchants Association responded with a lawsuit arguing that the tax should be overturned because it would hurt sales. While the lawsuit failed, the county is now reportedly retaliating against IRMA to the tune of $17 million.

According to a report from Chicago Tonight, “The county is looking for some payback from those suing to stop the new sweetened beverage tax.” Cook County Board President Toni Preckwinkle’s office confirmed that it is suing IRMA for “damages” brought about by their lawsuit. At issue is the county’s contention the lawsuit delayed the county’s ability to rake in taxes hand over fist from the consumption of soda.

Preckwinkle’s spokesman Frank Shuftan told Crain’s Chicago Business Journal in an email, “The financial damage to the county as a result of this delay is projected at more than $20 million … The county has every right to be made whole as a result of the judge’s ruling upholding the ordinance and removing the TRO (temporary restraining order).” In other words, Cook County wants the money they would have received from the tax, had IRMA not filed a lawsuit in the first place.

“I can tell you that I’m troubled by this, the chilling effect of the government saying that you best not challenge us because if you’re proven wrong we will come and get damages from you.”

Preckwinkle’s office responded by saying, “Our motion seeking damages has nothing to do with chilling anyone; it is to capture badly needed revenues to which the county is entitled based on the ordinance.”

The county’s response may be indicative of its budgetary woes. It has been projected that Cook County’s budget shortfall will likely reach $98 million, even with the soda tax factored in. The county even wanted to make the tax applicable to Supplemental Nutrition Assistance Program, also known as “food stamps,” but the courts prohibited the attempt by Cook County to tax its own governmental program.

Cook County employees will likely be affected by the budget shortfall. Preckwinkle said in June, “We’ve made it clear to our workforce that this is going to be an extremely challenging period, and I don’t think there’s any expectation on either side of the table that those kinds of increases will be repeated in this bargaining session.”

With the lawsuit against IRMA proceeding, it now seems Cook County will stop at nothing to not only overburden its residents with a senseless soda tax, but to also go after its businesses—including the ones that already pay sizeable taxes—if they dare to challenge the county’s revenue generating policies.

For those who may not think the tax is all that big of a deal, and who may drink the Koolaid believing people shouldn’t consume soda in the first place, here is an example of how the tax will affect the consumer. Considering all of the birthday parties that take place daily, the purchase of a simple 24-pack of Sprite will now cost Cook County residents about $10.

Ed Atwell, a resident of Cook County—or as he called it “Crook County”—uploaded a photo on Facebook of a Sprite purchase from Tony’s Finer Foods. The cost of the box of soda was a reasonable $5.99. The new soda tax was $2.88 at $.01 per ounce. Including the sales tax of 10.25% and the additional soft drink tax, the total for 24 cans of soda rose to a staggering $9.66. If that’s not an example of the proverbial highway robbery, we don’t know what is.

The tax doesn’t just hit soda either. As the Chicago Tribune reports, the tax applies to soda and diet soda, ready-to-drink sweetened coffees and teas, sports and energy drinks, and juice products that aren’t 100 percent fruit or vegetable juice, among other beverages. The tax also applies to free refills of lemonade. 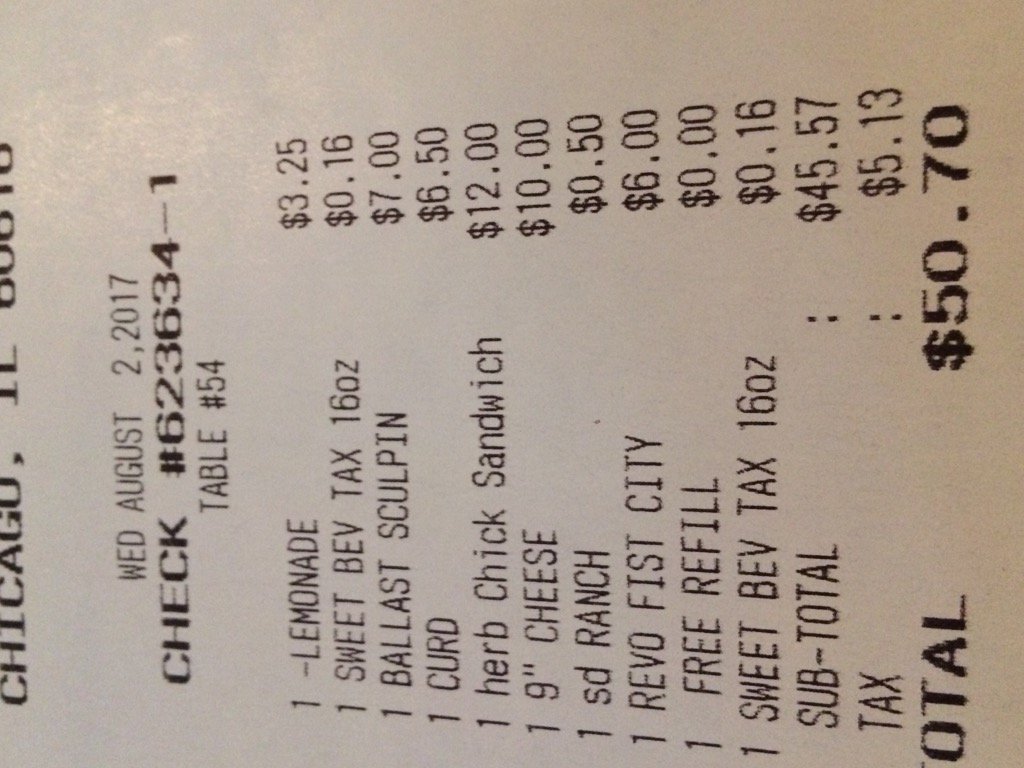 It appears as though Americans are powerless to change their government’s officials, and even when they do, budget shortfalls are often used as an impetus to discontinue the failed policies of previous administrations. But instead of fighting back, and becoming defendants in egregious lawsuits such as what IRMA now has to endure, consumers are voting with their feet. They are taking their business outside of Cook County, in an effort to save money.

As ABC Chicago 7 reported, residents are now going to neighboring counties to avoid the soda tax that went into effect Wednesday. Shopping outside of Cook County is estimated to cost the county 25 percent of its retail sales. Shopper Marty Dwan told Chicago 7:

“It all adds up, I mean, a little here and a little there. Well worth it to wait five minutes until I’m out of Cook County.”

When will the residents of Cook County finally reach their breaking point? Between the over-taxation of property values to the exorbitant soda tax, Chicagoans are feeling the pinch. Instead of fighting back, however, many are simply leaving, leading to the budget shortfalls the county is now facing. Enough is enough.

Will there be a new Tea-Party-style revolution take place in Cook County, but with soda? As if the street crime isn’t bad enough, now the county itself is reaching further into the pockets of its residents for a soda tax, shaming them for drinking the sweetened drinks in the process, and suing anyone who gets in their way. That’s not what capitalism looks like. That’s what theft looks like. The framers of The Constitution would be overthrowing the government of Cook County right now!