The Czech Pirate Party has booked several surprise wins in the local elections. The party gathered 5.3% of the total vote in the capital city of Prague and became the biggest political party in Mariánské lázně, with 21%. As a result, there is a good chance that the city may soon have a Pirate mayor.

Last weekend there were local elections in the Czech Republic, and the local Pirate Party has dozens of candidates on the ballots.

The Pirates campaigned with a program that advocates more Government transparency, more involvement for citizens, less copyright monopolies and the use of free software.

This message was received well by the public as 21 Pirate Party representatives were voted into regional parliaments. In addition, several other Pirates gained seats through the lists of other local parties.

One of the biggest victories was booked in Mariánské lázně where the Pirates came out as the biggest party with 21% of the total vote. This means that the Czech town may soon have its first Pirate mayor. 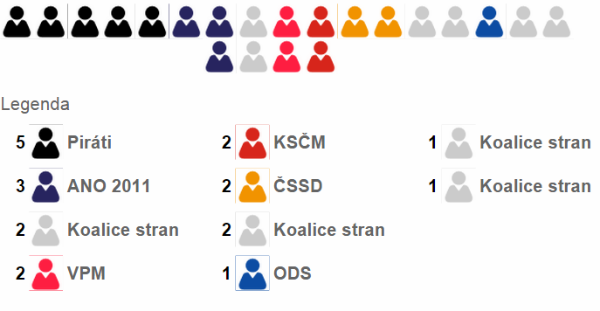 The Pirate Party also did well in the capital city of Prague where it received 5.3% of the vote. This translates to four seats in the local parliament.

Despite the successes the Pirates don’t expect that they will govern in many regions. This may happen in a few places, but only if they can agree on a good program with the other parties.

“Generally we are against coalitions, especially in Prague, but in some regions with parties and people who are closer to our program we might govern,” Pirate Party’s Markéta Gregorová tells TorrentFreak.

According to Maša Čorak, co-chairperson of Pirate Parties International, the Czech success was welcomed after several disappointing results in other European countries. Talking to the Pirate Times, she says that the victory will carry over to other countries.

‘I have no doubt that every single Czech pirate that succeeds in being an elected official will do a tremendous job in promoting our core goals and ideas and putting them back in the public spotlight. That is, after all, the beauty of this movement; a victory in just one country can be and will be a huge step forward throughout entire Europe,” she says.