You are at:Home»U.S.»Police State»Both police shootings result of poor training and police arrogance – Could have been avoided
July 8, 2016 Police State

Two more Americans are lying in morgues. The nation is once again outraged. While particulars of the cases in Baton Rouge and Falcon Heights are still being spun by various media outlets and government officials, one thing is certain: both shootings were completely avoidable. Both shootings included officers who were relying on poor training. Departments will say they don’t have the funding for proper training. This might have been the case a year ago, however on September 9, 2015 The Fifth Column and The Anti-Media offered to pay the fees for instructors to provide better training. While several individual officers who deserve to be applauded sought out the training on their own, neither department involved in either shooting did.

This article first appeared at FifthColumnNews

The Fifth Column released an article that provided a tiny glimpse into the offered training. Even though the article only provided a small sampling of the training, it touched on the faulty training that contributed to both shootings. It cited the case of Tamir Rice as an example of why officers need to keep their distance after receiving a report of an armed person. Had the officers in Baton Rouge done this, Alton Sterling would still be alive. The article reads:

A recent high-profile case that would have ended differently is the killing of Tamir Rice. Tamir was child playing with a toy gun in a park. Officers pulled up just a few feet from him, exited the vehicle, and immediately killed him. If officers had kept their distance and used range to their advantage, the officer would have felt safe enough to demand that the suspect drop the “weapon”, this order would have been obeyed, and Tamir would still be alive.

The article goes on at length about the hazards of “domination based compliance”. From the location of the entry wounds and the fact that the back driver’s side window is still intact, it is evident the officer in Falcon Heights was using this faulty and disproven tactic. Not just did the article explain why proper position during traffic stops saves lives, it included a brief video. That video demonstrates that because officers are unprotected while exercising domination based compliance at the window, they are more prone to getting shot and because of the increased risk, are more prone to shooting innocents in moments of misunderstanding.

How not to be a killer or killed cop – TFC from Justin King on Vimeo.

The tactics described in the article were not simply dreamed up by independent journalists. They are proven tactics agreed upon by a team of instructors with decades of experience. The team was comprised of ex-cops, former intelligence officers, former and current military contractors, convicts, bodyguards, counter-terrorism experts, and US Army Special Operations soldiers. This is training that would have cost departments tens of thousands of dollars to receive. Despite the free training being widely publicized, the list of departments that took advantage of the opportunity is extremely short: none. Not a single department took advantage of the opportunity to be trained by instructors certified by the JFK School of Special Warfare. Not one department thought it would be wise to reach out to a team of instructors who have not just law enforcement, but convicts on the team. Certainly the opportunity to meet face to face with actual criminal elements should have been pursued. Who would know better the methods of killing cops, than those who were prepared to kill cops?

Departments didn’t seek outside assistance because the thin blue line is arrogant. They can kill with impunity, or they could at the time of the initial offer. Over the last ten months, more and more officers are being indicted and convicted for their crimes. It’s plainly obvious the cops aren’t interested in preserving civilians lives enough to seek out better training. Maybe they will now that their lives and careers are on the line. 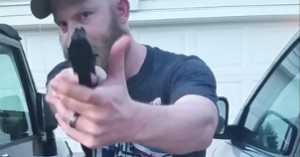 Nobody would accept a surgeon who refused to keep up with the latest advances in medicine. Why do we accept officers who used training deemed faulty decades ago?

READ MORE: How not to be a killer or killed cop

Editor’s Note: The initial offer was made ten months ago. At the time of release, we had not been able to confirm the entire team’s willingness to still conduct the training. However, if your department is interested in receiving comparable training, contact us. We will find someone qualified and capable of training your officers to stop shooting without need.

Many have stated the shootings are race-related. This very well may be true. Proving a cop is racist is almost impossible. Proving he used out of date tactics and training is easy. If an example can be made related to faulty training, the racism issue becomes less severe. The officer may be a racist, but he or she can’t gun someone down if we can convince prosecutors to pursue charges based on faulty training. The training they use provides the “reasonable” action. We need to make it clear that over-emotional officers and officers who insist on using domination based compliance need to suffer penalties based on their actions leading up to the shootings.

This article first appeared at FifthColumnNews