You are at:Home»World»Did the President of Turkey Stage His Own Coup?!
July 17, 2016 World

Long before Turkey’s president Recep Tayyip Erdogan accused Fethullah Gulen, a Turkish cleric who lives in self-imposed exile on 1857, Mt.Eaton Road in  Saylorsburg, Pennsylvania, last night and again today of being the “terrorist” mastermind behind Friday’s failed coup attempt and demanding – unofficially, on prime time TV but not via diplomatic channels – that the US extradite the 77 year old, he was doing precisely that. For years, Erdogan had used the cleric as a scapegoat punching bag, who had somehow managed to create an entire “parallel state” in Turkey which was just waiting for its opportunity to pounce and snatch Turkey from Erdogan. Hence the perpetual (fake) fear of coups. Hence the public displays of (fake) paranoia. Hence the relentless – and all too real – concentration of power.

And as many expected, Erdogan once again accused Gulen of being responsible for the Friday coup, no matter how ridiculous such an allegation sounded. This time Turkey went so far asaccusing the US of being “behind the coup” for harboring Gulen.  “Today, after this coup attempt, I’m once again calling on you, I’m saying: Extradite this man in Pennsylvania to Turkey now,” Erdogan said on Saturday in televised remarks from Istanbul in a personal appeal to President Barack Obama. Turkey’s secretary of labor, Suleyman Soylu, went one better and told TV channel Haberturk: “The US is behind this coup.”

As for Gulen’s position, he had denied as recently as yesterday, the accusations and said Saturday morning in an emailed statement through a spokeswoman that he denounced the overnight coup attempt. In a video released by the New York Times, a man appearing to be a doctor measured Mr. Gulen’s blood pressure, possibly to point out the cleric’s ailing health. 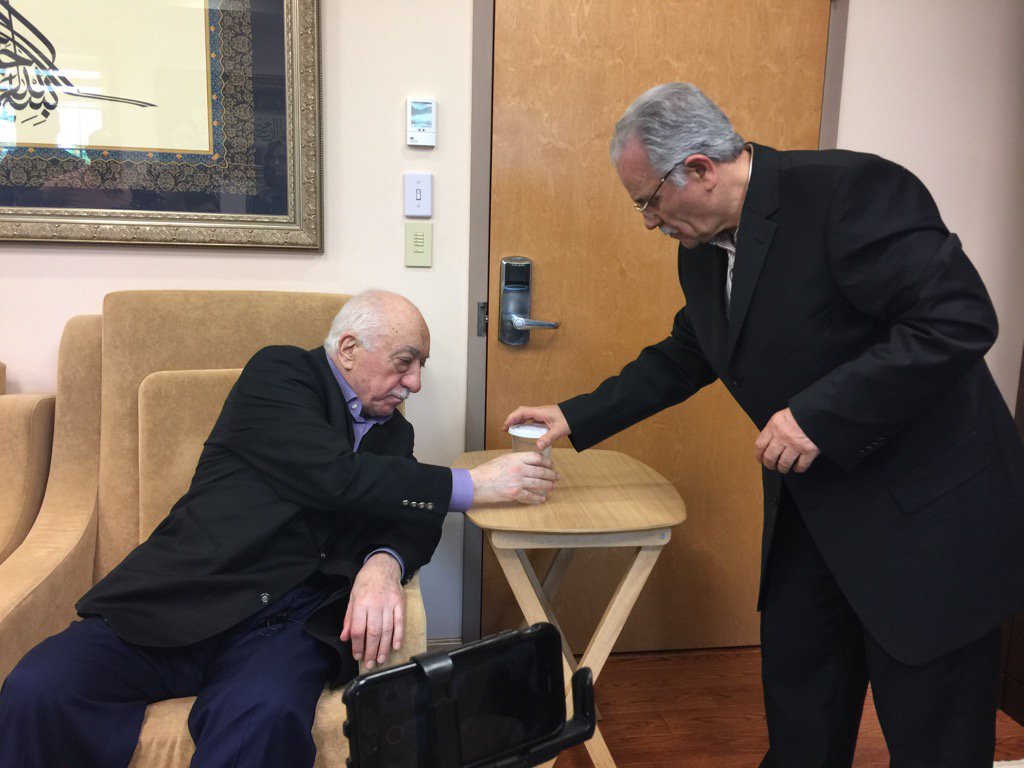 “I don’t know if they are my followers, but because of all things that have taken place (in Turkey) they may have been sympathetic…But honestly, I don’t know any of them,” Mr. Gulen said in the video, shown apparently sitting on a couch in his Pennsylvania home.

However, for the best explanation of Gulen’s position, one which incidentally also is accurate in describing what happened in Turkey on Friday night, we go to the FT, which was granted a rare interview from Gulen’s residence in rural Pennsylvania and where a “frail Mr Gulen” said accusations by Mr Erdogan that he had masterminded the uprising were absolutely groundless. 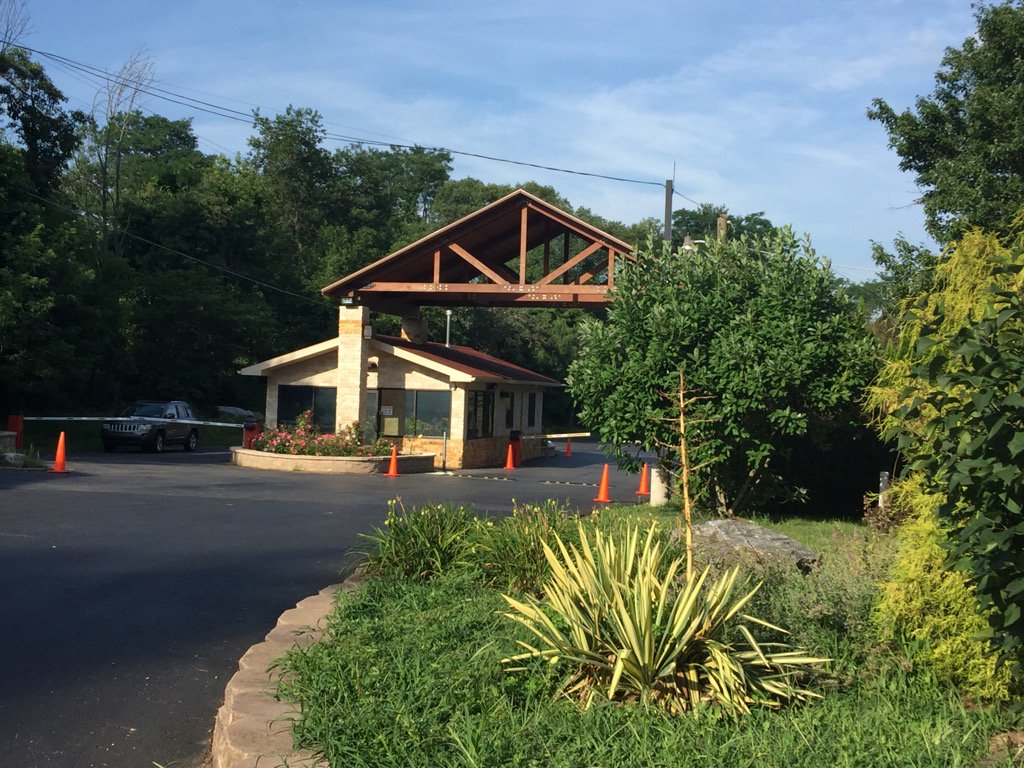 Behind this gate resides Gulen, the man Erdogan accused of plotting the Turkish coup

In fact, as the FT reports, Gulen “has tried to turn the accusation against his political rival by suggesting that Mr Erdogan’s ruling AKP party had staged the uprising.”

“I don’t believe that the world takes the accusations made by president Erdogan [against me]seriously,” the moderate Islamic preacher said from a room inside his home at the Golden Generation Worship and Retreat Center, nestled in the rolling hills of the Pocono Mountains..

“There is a possibility that it could be a staged coup [by Mr Erdogan’s AKP]and it could be meant for further accusations” against Gulenists and the military, he said. 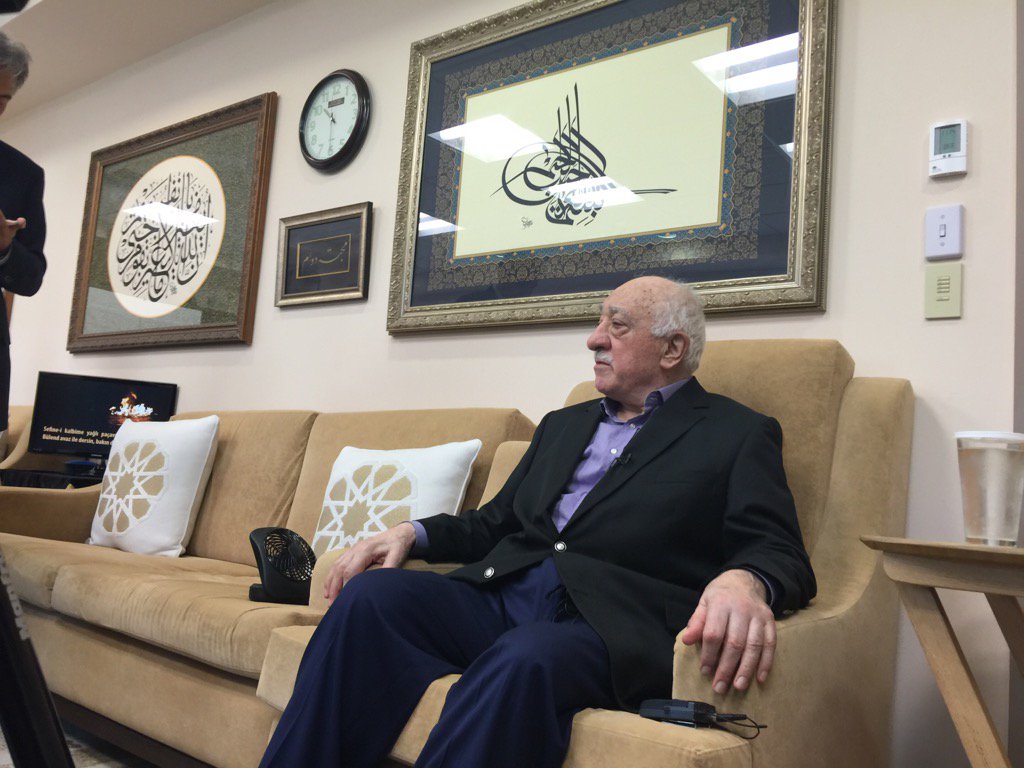 Gulen: “There is a possibility that it could be a staged coup (by Mr Erdogan’s AKP) “

Considering just how poorly executed the coup was, and how much Erdogan stood to gain by crushing it with the help of a Skyped conversation as he “heroically” flew back to Istanbul, to be followed shortly thereafter by the arrest of nearly 3000 judges and prosecutors, we have a feeling Gulen is spot on in which assessment.

Gulen then said that he was not worried about being deported from America despite Turkey putting further pressure on the US government to extradite him in the aftermath of Friday’s coup attempt. He said Erdogan’s calls for his extradition were just his latest bluff, as he compared the Turkish president’s political tactics to those of Adolf Hitler’s Nazis in 1940s Germany.“

It is very clear that there is intolerance among the leadership of the ruling party and the president,” Mr Gulen said, speaking in Turkish and communicating with reporters through a translator.

“They have confiscated properties and media organisations, broken doors and harassed people in a fashion similar to Hitler’s SS forces,” Mr Gulen said, as he described how his followers in Turkey had been mistreated over recent years by Mr Erdogan’s party.

Come to think of it…

Then again, maybe Erdogan will get his witch after all.

The FT adds that in a sign of the rising tension around Mr Gulen, about a dozen people started assembling outside his compound around noon on Saturday, shattering the rural calm that usually surrounds the residence. “The US should stop protecting him,” screamed a woman wearing a headscarf and waving a Turkish flag in her right hand and a flag portraying Mr Erdogan in the other. “Gulen is a criminal,” she shouted as protesters gathered outside the Imam’s residence.

Watch: A report from Fethullah Gulen’s US compound, where he denied charges of orchestrating Turkey’s military coup.

Meanwhile, Pennsylvania state troopers and a small group of armed private security forces hired by Mr Gulen’s centre were keeping the protests at bay. Gulen told reporters that he had not received any communications from the US government about a potential extradition.

Here Alp Aslandogan, a media adviser to Mr Gulen, repeated precisely what we said earlier today: Erdogan wants “the best of both worlds, accusing him of being a puppet for the US and also asking the US to extradite him,” Mr Aslandogan said.

Gulen, who is aged 77, was visibly weak. He suffers from diabetes and heart disease, according to his doctor. The preacher, who has been living in self imposed exile in Pennsylvania since 1999, lives in modest conditions despite the vast expanse of the complex. The FT was able to access his bedroom and praying areas, which were ornately decorated with Islamic art and several Turkish flags.

Despite accusing Mr Erdogan’s ruling party of having put democracy at risk in Turkey, Gulen said that he was against all kinds of military coups, as he had been a victim of such uprises in the past.

Meanwhile, Erdogan lives in a brand new palace which cost more than $600 million to build,with 1.6 million square feet of floorspace, 1,000 – yes, really – rooms, features thousands of trees imported from Italy at a cost of up to $10,000 each; the taxpayer-footed electricity bill from the palace will run $313K/month.