Last year we noted, via the Liberty Blitzkrieg blog, that rents in San Francisco and surrounding areas had grown so out of control that even Ivy Leaguers, like 31 year old Luke Iseman of The Wharton School, were having a hard time making ends meet.  After growing tired of renting a run down, tiny apartment for $4,200 per month, Iseman decided to take a novel approach to housing.  So he rented out a warehouse space and filled it with 11 steel shipping containers that he now rents out as makeshift apartments for $1,000 per month.  We learn more from Bloomberg:

Luke Iseman has figured out how to afford the San Francisco Bay area. He lives in a shipping container.

The Wharton School graduate’s 160-square-foot box has a camp stove and a shower made of old boat hulls. It’s one of 11 miniature residences inside a warehouse he leases across the Bay Bridge from the city, where his tenants share communal toilets and a sense of adventure. Legal? No, but he’s eluded code enforcers who rousted what he calls cargotopia from two other sites. If all goes according to plan, he’ll get a startup out of his response to the most expensive U.S. housing market.

Iseman collects $1,000 a month for each of the 11 structures parked in the 17,000-square-foot warehouse he rents for $9,100. Tenants include a Facebook Inc. engineer, a SolarCity Corp. programmer and a bicycle messenger. 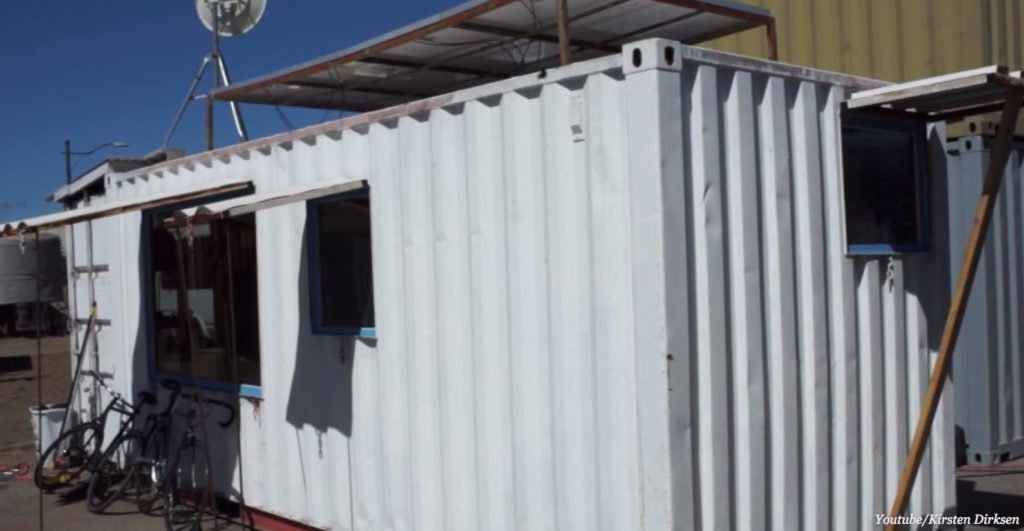 Now, billionaire California real estate developer John Sobrato is looking to implement a similar plan in Santa Clara to house a portion of the city’s 6,500 homeless.  The plan calls for converting 200 steel shipping containers into a mix of 160 and 240 square foot micro apartments that could then be rented out homeless and low-income families.

Sobrato, who has spent much of his career building office space for many of Silicon Valley’s technology giants, asked the Santa Clara City Council for exclusive negotiating rights to lease a 2.5-acre plot of city-owned land, three miles south of the San Francisco 49ers football stadium and currently leased to a Hyundai dealership. His plan for the lot calls for a mix of 160- and 240-square-foot units, large enough for a kitchenette and bathroom with shower, which he said could be fashioned out of re-purposed shipping containers.

Under the plan, the developer asked for a 57-year lease at the cost of $1 a year. In return, the Sobrato Organization, based in Cupertino, would build and own the apartments, then lease them back to Santa Clara County, which would hire property management and homeless service providers. The project, called Innovation Place, could open as soon as 2018, with half the units rented to homeless and half offered to renters earning between 50 and 80 percent of the area’s median income.

Mock ups of the proposed housing complex were presented at the Santa Clara city counsel meeting:

Of course, not everyone is supportive of Sobrato’s efforts.  Nearby neighbors, who are undoubtedly paying $1,000’s of dollars per month for their shoe boxes, have already started an online petition to shut down the project.

What has not been stated in this proposal, is how the nearby neighborhood is already being negatively affected by the mismanaged apartment complexes to the north of this potential landing spot for the homeless. Nearly 5 blocks of mismanaged, high density, low-income housing already exists across the street. Due to these apartments and the high density living that accompanies these apartments, nearby neighborhoods are experiencing a spike in crime, drug use, alcohol use, litter and lack of available parking. The nearby neighborhood streets, which at one time were quiet are now being used as a main thoroughfare for vehicles and pedestrians. Cars are being broken into and keyed and houses are being burglarized. There have been multiple hit-and-runs associated with the extra foot and vehicle traffic and the police have been called out multiple times for “suspicious” individuals either loitering around the neighborhood or sleeping in their cars.

Isn’t it so interesting how the liberal elites of San Francisco are always the most vocal supporters of any number of federal subsidy programs for low-income families…but we guess that only applies to the extent those low-income families stay far away from their posh, suburban, “safe places.”