Blakely, in a bit of unfortunate timing, just announced that his department had purchased 5,000 copies of the spyware earlier this week

Okay, so we thought the response from San Diego’s District Attorney Bonnie Dumanis was pretty bad to the revelations about ComputerCOP. After all, she was responding to the news that she had purchased and distributed dangerous spyware masquerading as software to “protect the children” — and the best she could come up with was that her “security” people still thought it would protect kids? But apparently Damanis has nothing on Sheriff Mike Blakely of Limestone County, Alabama.

Blakely, in a bit of unfortunate timing, just announced that his department had purchased 5,000 copies of the spyware earlier this week, so perhaps it’s understandable that this “perfect election and fundraising tool” might actually turn into something of a liability. But Blakely’s not going down without a fight. When presented with the news that he’s proudly handing out tools that are making the children he’s supposed to be protecting less safe, Blakely went with an ad hom the messenger approach, attacking EFF’s credibility, and calling them “liberals.”

Blakely referred to the EFF criticism politics as an “Ultra-liberal organization that is not in any way credible on this. They’re more interested in protecting predators and pedophiles than in protecting our children.”

Anyone even remotely familiar with EFF recognizes that basically every word in that statement is ridiculous, but what are you going to do? The idea that EFF isn’t credible on security issues is laugh out loud funny (and, indeed, despite attending a conference and being in a room full of people, I literally laughed out loud upon reading it). However, Blakely insists his IT people are sure the software’s fine:

“We have had the key logger checked out with our IT people. They have run it on our computer system.” He said. “There is no malware.”

Reread that a few times. “We had the key logger checked out… there is no malware.” Dude. A keylogger is malware. That’s what it does. From the description here, it sounds like his “IT people” ran some anti-malware software on the computer they installed ComputerCOP on, and because it didn’t flag it, they insist it’s not malware. But a keylogger is malware by definition. And the fact that this malware happens to pass unencrypted text, including passwords and credit card numbers, over the internet makes it really, really bad.

But don’t tell that to Sheriff Blakely. He insists that ComputerCOP might have stopped Columbine. I’m not joking.

On the phone Wednesday he added “There are some parents out in Columbine Colorado, if they had this kind of software, things would have turned out differently.”

That comment is so off it defies a coherent response.

Meanwhile, I’m sure that Sheriff Blakely’s “IT People” are trustworthy, given that his website looks like it was designed in 1997 and hasn’t been touched since. It even has a visitor counter and a “this site best viewed in Internet Explorer” badge. I’m not joking. And a scroll. The only thing it’s missing is an under construction gif and the blink tag: 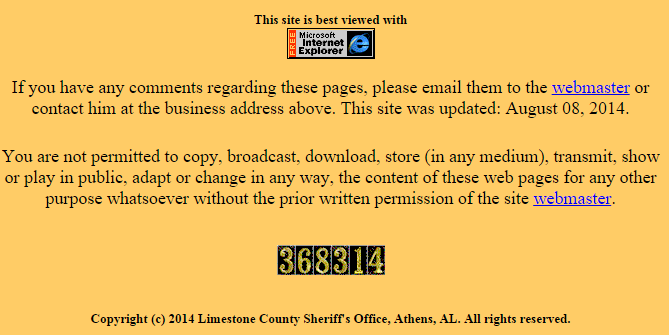 And, uh, note that text there:

You are not permitted to copy, broadcast, download, store (in any medium), transmit, show or play in public, adapt or change in any way, the content of these web pages for any other purpose whatsoever without the prior written permission of the site webmaster.

And there’s a copyright notice below it. Of course, anyone who views the website has copied, downloaded, stored and transmitted the webpage in some manner — so, I’m not quite sure what to do other than to say, that most of those demands are completely bogus and not based on any actual law. As for the copyright — well, while technically only federal government works are exempt from copyright, and state and local governments can get a copyright in some fashion, it’s generally not considered the appropriate role of government officials to be copyrighting official government works. Furthermore, in such cases, there would likely be a very strong presumption of fair use for a whole host of reasons.

Oh, but it gets worse. Not only are you not supposed to copy any of the text on Sheriff Blakely’s website, the terms of service on his website say he might put you in jail if you do:

The unauthorized use, copy, or reproduction of any content of this site inclusive, may be punishable by both fine and imprisonment.

Under what legal theory is that happening? As a sheriff, aren’t you supposed to, you know, actually know what the law is? Maybe work on that before slamming the good folks at EFF while distributing dangerous spyware that makes kids less safe. And find someone who’s built a website in the last decade.