The website of Seattle’s Freedom Socialist Party lists its most recent presidential candidate Stephen Durham’s political positions, which include the party’s effort to “raise the minimum wage to $20 an hour.” The group also avidly supported a successful push for a $15-per-hour minimum wage in Seattle, which passed this year. However, as Zenon Evans at Reason pointed out, that same political party just got caught posting a $13-per-hour job listing seeking a web content manager with web development skills.

By Barry Donegan via BenSwann.com

Opponents of increases to the minimum wage often cite unintended consequences like price inflation, the elimination of jobs for unskilled workers, and small businesses‘ inability to pay higher wages as reasons for opposing such measures. As a small non-profit, the Freedom Socialist Party would certainly be wise to limit its labor expenses to the extent possible considering the fact that it is competing with organizations like the Republican and Democratic parties that have exponentially bigger budgets.

However, the Freedom Socialist Party promised that its push for a $15-per-hour Seattle minimum wage would “leave no one behind.” The party’s article promoting Seattle’s minimum wage hike includes this choice quote, “The Seattle fight has moved from the streets to City Hall. In May, new Mayor Ed Murray, Democrat, announced his proposal for $15/hour — for some workers, after several years. Healthcare, tips, and other ‘compensation’ would be calculated into their ‘income.’ In short, Mayor Murray’s plan caters to big business… Concretely, Murray’s proposition affects 102,000 working people in Seattle.” In that quote, party activist Linda Averill effectively criticizes loopholes in Seattle’s minimum wage that allow some employers to get around it.

One such loophole allows small employers like the Freedom Socialist Party to wait seven years before fully implementing the $15 minimum wage. The City of Seattle’s posting on the new minimum wage law says, “Small employers (businesses with fewer than 500 employees) will reach a $15 an hour minimum wage in seven years. Also established is a temporary guaranteed minimum compensation responsibility of $15 an hour to be met within the first five years, which can be achived [sic]by combining employer-paid health care contributions, consumer-paid tips, and employer-paid wages.” Consequently, the Freedom Socialist Party is not technically violating the minimum wage law that it promoted, but is merely using a loophole that it criticized to leave its own future web content manager behind with regards to the $15-per-hour pay rate.

Reason points out the fact that web development, one of the skills required of the Freedom Socialist Party’s future employee, typically brings in around $62,500 per year according to a Bureau of Labor Statistics citation by US News and World Report, meaning that the chosen applicant will have to work at wages far below industry norms. Given the reality that small organizations and businesses do not have unlimited money and sometimes can not afford to raise wages to an arbitrary level, the Freedom Socialist Party’s example proves that its rhetoric about small businesses’ struggles with conforming to a minimum wage are not just a “phony concern,” an argument that party activist Linda Averill advanced in her article promoting Seattle’s $15 minimum wage hike. In fact, it is a very real concern for the Freedom Socialist Party itself.

The controversial job listings were posted on Craigslist and Indeed, and a screenshot of the Indeed posting can be seen below. One wonders how this future employee will feel when being asked to design graphics promoting a $20-per-hour minimum wage while working for $13 per hour. 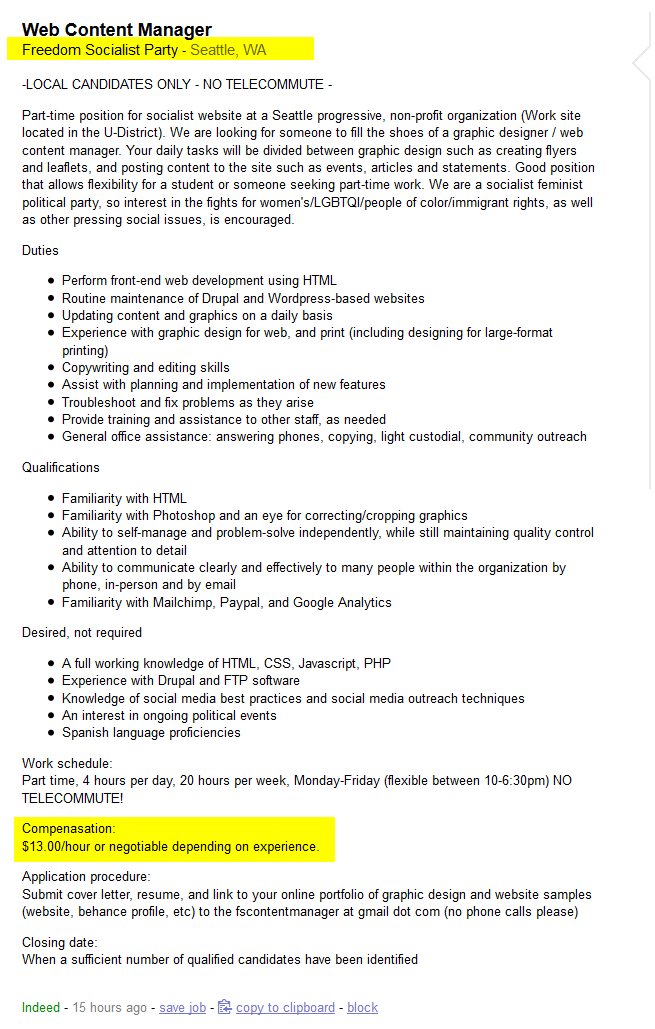 This article was originally posted at BenSwann.com