You are at:Home»Philosophy»Terrorism and Mass Murder Are Not the Same Thing
November 17, 2017 Philosophy

On Sunday, November 6, 2017, while attending my own worship service, I learned that 26 of fellow Christians at the First Baptist Church in Sutherland Springs, TX, were murdered just as their worship service was wrapping up. I knew no details about the shooter or the victims, other than it was in a baptist church in a small town in Texas.

Learning such news from the trusted voice of my own pastor was surreal. Usually, I would hear about a tragedy like this from the news or filtered through my Facebook feed. But to hear it in a safe space, I was able to meditate on the tragedy and the victims themselves without any political assumptions.

The first piece of information I learned was that the perpetrator, Devin Patrick Kelley, a 26-year-old from New Braunfels, Texas, was an atheist. His public Facebook included atheist views, anti-religious sentiments, and pictures of guns.

Yet these known facts about Devin Patrick Kelley did not stop others from politicizing his identity through memes. In the below meme, Kelley is classified as a “Christian” terrorist. 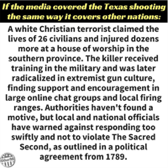 The Other 98% is a popular Facebook group who disseminates information in the form of memes similar to the one above.

You see, the Other 98% is the media, the new media, a democratized media that flourishes on social sites such as Facebook and Twitter and is not limited to the confines of television, radio, or print. And this media site was deliberately hiding the one thing we did know about the shooter – that he was an atheist.

It is a strange thing to assume someone’s religious beliefs just because of their ethnic and geographic demographics. The Other 98% labeled Devin Patrick Kelley a Christian for no other reason than he is white.

Furthermore, it is striking that they would also use the word “terrorist” to describe Kelley. Atheism is simply defined as a lack of belief in any supernatural deity.  It does not inherently prescribe a set of behaviors. To assume so would be to make a dangerous assumption. It could lead to judgments placed on other atheists whose only similarity to Devin Patrick Kelley is their lack of belief in the traditional concept of God.

However, there is a growing trend on the internet to want to address all mass murderers as terrorists. The reason, as stated rather explicitly in the below meme, is to illustrate to America that the word “terrorist” should be ascribed to other mass murders of different ethnic backgrounds. 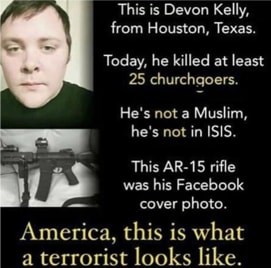 Words Matter, and So Do Their Definitions

The problem is not that we as a society do not know how to label or consider white men as terrorists. The problem we have as a society is we do not understand the definition of the word terrorism.

Domestic terrorism: Perpetrated by individuals and/or groups inspired by or associated with primarily U.S.-based movements that espouse extremist ideologies of a political, religious, social, racial, or environmental nature.

The site continues with this example: “the June 8, 2014 Las Vegas shooting, during which two police officers inside a restaurant were killed in an ambush-style attack, which was committed by a married couple who held anti-government views and who intended to use the shooting to start a revolution.”

Practically speaking, terrorism is an important and distinguishing label from mass murder because if there is an ideological motive behind the violence, authorities can assess if this violence was an isolated incident or connected to cell groups of other potential violent agents.

Ideologically speaking, terrorism is an important and distinguishing label because if violence is perpetuated because of a set of ideas, the set of ideas can be addressed. We can write and talk peacefully about our respective disagreements about politics, religion, or racial issues. From dialogue, other resolutions apart from violence are possible.

Why Do We Do This?

Yet, the question is, why is there a push on the internet to classify mass murder as terrorism? Many feel, as represented by the above meme, that the current label of terrorism is tied to discrimination against Muslims as a group of people. While it is dangerous to look at any group prejudicially, there is a chance that this basic assumption behind that meme is untrue.

Perhaps it is Maajid Niwas, a former member of a terrorist organization and now a Muslim reformer, who can address this issue best. Born in Southend-on-Sea, Essex, to a British Pakistani family, Nawaz is a former member of the Islamist group Hizb ut-Tahrir. His affiliation with this group led to his arrest in Egypt in December 2001, where he remained imprisoned until 2006. 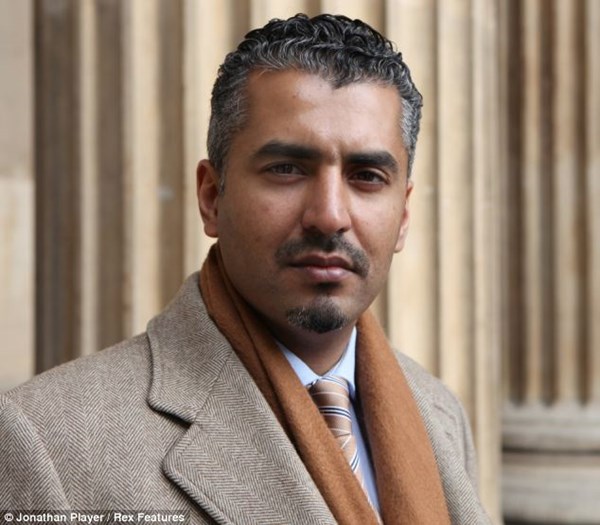 Nawas had a change of heart after reading books on human rights and interacting withAmnesty International. This led Nawaz to leave Hizb-ut-Tahrir in 2007, renounce his Islamist past and become one of Britain’s leading Muslim Reformers.

He describes this dilemma brilliantly on Facebook with the following:

Terrorism is about motive and method to achieve that motive. It’s legally, and politically distinct from mass murder, genocide and other heinous crimes just like pedophilia is distinct from rape. We in the U.K. called the IRA terrorists. Just as we call ISIS terrorists now. It’s not about race or hating one religion more than another.

Terrorism is a distinct category because it’s about trying to terrorize a population to alter their ideological or political course. It is deliberately and rightly distinguished from mass murder even if the latter also (obviously) scares people. I bet you’ve never argued for redefining “genocide” to call it terrorism instead just because both also “terrorize” people. Nor have you probably advocated redefining torture as terrorism, though it obviously terrorizes the victim.

Nawas is right. The reason behind these definitions matter. The mass shooting in Sutherland Springs, Texas, is terrifying. Unlike terrorism, mass murder does not include a ready-made motive. We are all left with the horrifying question of why, and mass murder gives us no answer to that why.

But one thing these definitions do afford us is the ability to direct our focus to what matter: the victims. Twenty-six members of a congregation are now gone, including multi-generational members of the same family. We add nothing to the pain and suffering of this tragedy by changing the labels of words. It only distracts from their real sorrow and grief.

It is our job now to grieve with them.

Jaye Sarah Davidson is a graduate from Florida State University’s Film School. She has made short films that have played all over the United States. She has worked as a producer and editor for commercials, music videos, and nonprofits. She is very excited to be a part of the Liberty movement.