A predictable response to the horrific massacre at a gay nightclub in Orlando, in which a gunman murdered 49 people and injured 53 others, mostly Latino, is to restrict gun ownership to police only.

But this response ignores the real relationship gay and ethnic minority populations have had with police. It’s a history of violence, targeted specifically at queer and brown bodies.

When we discuss privilege in America, we rightly point out that straight, white, cisgendered, male Americans have the tremendous advantage of not being directly negatively impacted by institutional, systemic racism, sexism, transphobia and homophobia.

But what we don’t discuss often enough is how American law enforcement privileges the lives of straight, white, cisgendered, male Americans over the lives of others.

Those who dream of a utopia in which only the police have guns must reckon with the reality that to disarm everyone but the police puts marginalized communities at the utter mercy of American police departments who have proven themselves to be more than happy to violate black and queer bodies, and court systems which have proven themselves unwilling to hold them accountable.

A history of racial violence

Despite what you’ve been taught, the fight for equality under the law for black Americans did not start with boycotts and marches. It started with black guys with guns.

Most Americans immediately connect Reverend Martin Luther King Jr. and Rosa Parks to the civil rights movement. You probably also know Emmett Till. But you may not know Dr. T. R. M. Howard.

Emmett Till was the third black male to be murdered in Mississippi in a three-month span 1955.

After trying to vote in Belzoni, Reverend George Lee was shot and killed at point blank range while driving. Weeks later Lamar Smith succeeded in casting his ballot in Brookhaven before he was shot and killed in broad daylight, before witnesses in front of the county courthouse.

Police made no arrests in connection to either murder. Witnesses rightly feared for their lives and did not come forward to testify.

Then on August 28, 1955 three men kidnapped 14-year-old Emmett Till at gunpoint around 2 a.m. They put Till in the bed of a pickup truck and drove him to various places to pistol whip him and decide what to do. Finally they shot him dead. Before dumping his body, the murderers showed his mutilated corpse to a black man saying, “That’s what happens to smart niggers.”

Till’s crime wasn’t voting, but whistling. A habit he picked up to alleviate his stuttering, a few white men thought it was directed at a white girl.

Till’s mother, Mamie Till Bradley, insisted on an open-casket viewing of Till’s mutilated body and tens of thousands of people showed up to see it. Till’s murder and the sight of his body enraged and activated civil rights leaders at the state and national levels of the NAACP. But everyone still feared for their lives too much to come forward and testify.

That’s when wealthy physician and civil rights leader Dr. T. R. M. Howard came forward. Howard used his considerable wealth to hire armed bodyguards to protect himself, his family, and anyone else willing to come forward to testify against Till’s murderers.

These witnesses made the trial possible, and the trial was “The first great media event of the civil rights movement,” according to theNew York Times.

While Till’s murderers were acquitted, the tide had turned. Armed black people were no longer too afraid to stand up about injustice. Howard made sure Mose Wright, the first man to ever testify against a white man in court and live, was able to escape to Chicago after the trial.

Two months after Till’s murder, Montgomery civil rights activists held a meeting to discuss Till’s case and other recent murders of civil right activists. Rosa Parks attended this meeting, and then one month later she refused to give up her seat to a white passenger on a Montgomery city bus.

The story of the struggle for gay rights has been similarly sanitized.

Black Americans in the south could not rely on law enforcement for help. In the leadup to the Till trial, Tallahatchie County Sheriff Clarence Strider told the media he believed Till’s body was not Till’s but was a decoy planted by the NAACP. He confined two witnesses to jail to prevent them from testifying. And during the trial he said to black spectators coming back from lunch, “Hello, Niggers!”

The relationship between queer Americans and law enforcement is even worse.

Rampant homophobia and transphobia in the 1960’s meant out queers were unwelcome in most bars and restaurants. That made the places they were allowed extremely important. But it also made them a target for police raids. States adopted anti-sodomy legislation for the purpose of giving police a pretext for mass arrests of queers. By 1960, every statehad an anti-sodomy law.

In New York, the gay bars were mostly controlled by organized crime who paid off police to prevent frequent raids. Yet the raids were still pretty frequent, happening once per month for each bar on average. San Francisco gays had it no better. When police showed up to Compton’s Cafeteria to arrest men dressed as women in 1966. This time, the patrons rioted, slinging cups and plates and breaking the plexiglass windows.

When police conducted an unannounced raid at the Stonewall Inn, a mafia-owned gay bar in Greenwich Village, patrons and supporters rioted violently for days. This inspired organized meeting and marches for gay rights. Before two years had passed after the Stonewall riots every major American city had a gay rights group.

It would be lovely if equality under the law were a reality in America today. But you only have to look as far as the murders of Freddie Gray or Eric Garner to see that we are not there yet.

Here’s what the Baltimore Police Department tweeted after one of their officers was acquitted in the death of Freddie Gray. 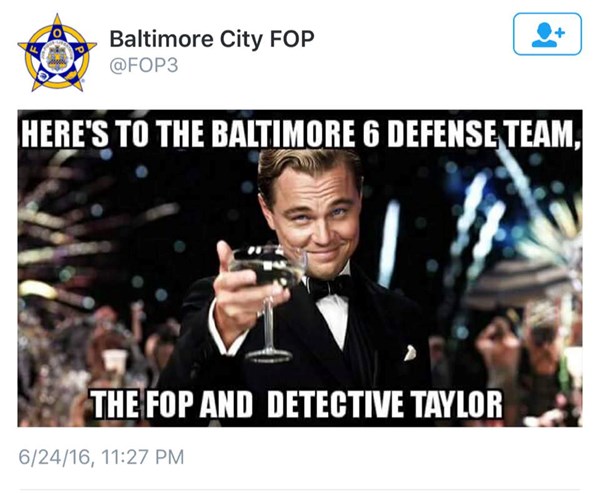 They raised a toast to the fact that the officer who decided not to put a seatbelt on the handcuffed Freddie Gray and drove him around the city, every twist and turn throwing his body against the metal walls, whose actions are directly responsible for his untimely, violent death, would face no criminal penalties.

Gun control puts marginalized Americans at the utter mercy of a police force that has perpetrated thousands of violent raids of gay nightclubs, yet could do absolutely nothing to stop the massacre in Orlando. Gays need guns, not only to protect themselves from cops, but also to protect themselves from being targeted by civilians like the Orlando shooter and the homophobes who threatened Tom Palmer.

The people who posit gun control for the purpose of protecting gays in the wake of the Orlando massacre benefit from tremendous privilege. They get to live in ignorance of the role police have played in hurting gay Americans, and in ignorance of the role guns have played in fomenting the movement for civil rights. And in particular, white, straight pro-gun control liberals can safely advocate for disarming the marginalized while they enjoy the privilege of not being heavily targeted by violent bigots, including cops.

Perhaps it’s within the realm of possibility that disarming people will protect the marginalized. But only if we disarm the police. 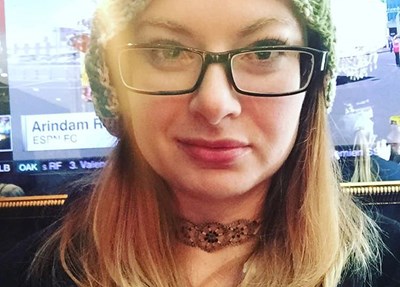 Cathy Reisenwitz is a D.C.-based writer. She is Editor-in-Chief of Sex and the State and her writing has appeared in The Week, Forbes, the Chicago Tribune, The Daily Beast, VICE Motherboard, Reason magazine, Talking Points Memo and other publications.